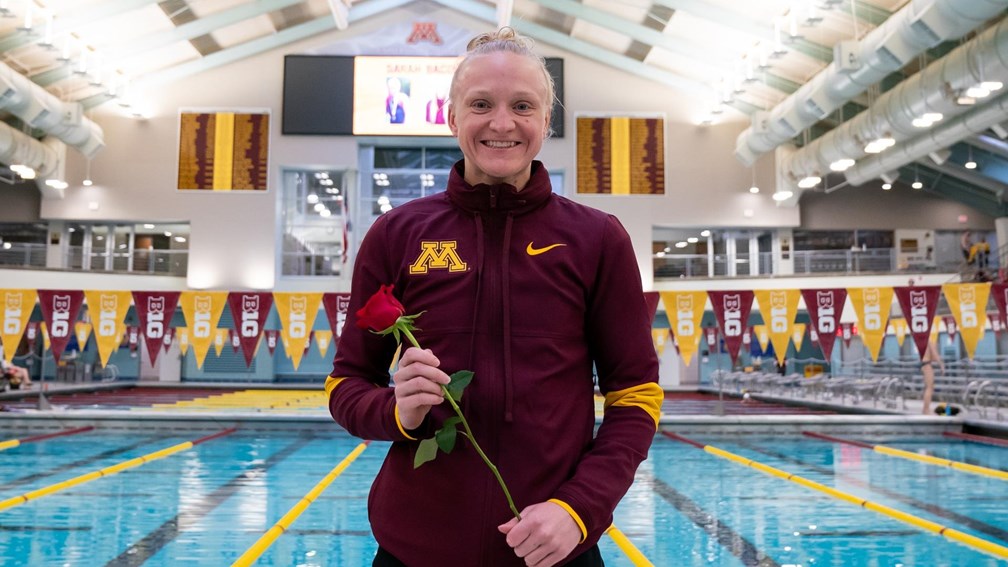 University of Minnesota diver Sarah Bacon has been named the Honda Sports Award winner for swimming & diving for the 2020-2021 season. That makes her the first-ever diver to take the honor.

The Honda Sport Award has been presented annually by the CWSA for the past 45 years to the top women athletes in 12 NCAA- sanctioned sports and signifies “the best of the best in collegiate athletics”.  The winner of the sport award becomes a finalist for the Collegiate Woman Athlete of the Year and the 2021 Honda Cup, which will be presented on a telecast on CBS Sports Network on June 28th at 9 pm ET.

“I really appreciate being nominated for this award”, said Bacon. “To say I am honored to have received this amongst the other three amazing female swimmers is such an understatement! I am grateful for this and want to say a huge thank you and shout out to everyone who has helped me along the way in my collegiate career, especially Wenbo Chen.”

Bacon, an Olympic hopeful who has said she is not planning to take advantage of the extra season of college eligibility afforded by the NCAA, won the 1-meter and 3-meter springboard diving titles at the 2021 NCAA Championship meet. She has now won the last 3 titles on 1-meter after winning in 2018 and setting the NCAA Championship Record in the event in 2019.

Bacon finishes her career as a four-time NCAA diving champion, 8-time CSCAA All-American, two-time Big Ten Diver of the Year, 2021 CSCAA Division I Women’s Diver of the Year, and the winningest woman in Minnesota school history in any sport.

“I think it’s great for her because she’s put in a lot of time and worked very hard at being the best that she can be”, stated head diving coach Wenbo Chen. “This is a special year for her, not just because of the pandemic, but because of all she’s gone through with taking an olympic year last year that was postponed to this year. She’s been training so hard for that, so she absolutely deserves this award. She’s put a lot into this sport.”

The CWSA, celebrating its 45th anniversary year, has honored the nation’s top NCAA women athletes for their superior athletic skills, leadership, academic excellence and eagerness to participate in community service.  Since commencing its partnership in 1986, Honda has provided more than $3.4 million in institutional grants to the universities of the award winners and nominees to support women’s athletics programs.

Bacon is the first Minnesota women to win a Honda Sports Award in any sport, in spite of the school’s powerful history in volleyball, among other sports.

Swimmers have gone on to win the Collegiate Sports Woman of the Year 9 times, which is second only to basketball (15 times).