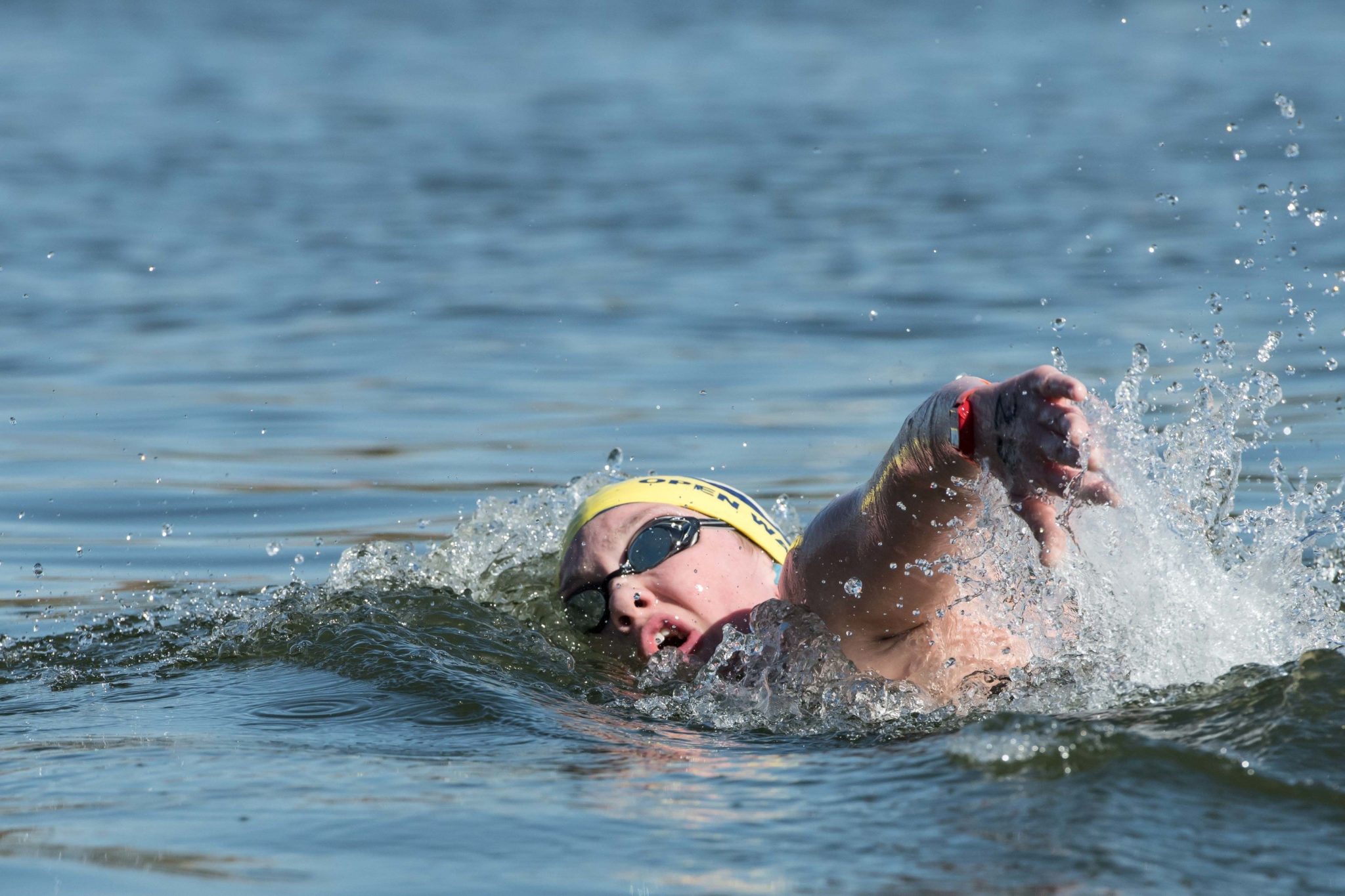 The 2021 U.S. Open Water National Championships wrapped up on Sunday morning in Fort Myers Beach, Florida with four different distance races going off at Lynn Hall Park. The men’s 5K opened the morning followed by the women’s 5K, with the top five finishers earning 2021-2022 U.S. National team status and associated perks and funding. Then, the men’s and women’s 7.5K closed the evening, with the top two eligible finishers (ages 17-18) qualifying for the 2021 World Junior Open Water Championships in Victoria, Seychelles from August 13-15.

After the first lap, Mission Viejo’s David Heron led the head crew along with Joey Tepper and Florida’s Brennan Gravley. Into the second lap, Tepper faded out of the top three as another Florida Gator, NCAA champion Kieran Smith, was swimming with the top three swimmers. During the final lap, Smith faded out of the top five as Dylan Gravley accelerated towards Heron and B. Gravley.

When interview on his race strategy, Heron explained, “It was rough again like the 10K. It felt fast going down (the course) and then slow going up because it was so choppy going against the waves. The pace was a bit quicker; my goal was to stay behind someone until that last straightaway and it worked out well. I felt strong on that last lap. I was just trying to conserve as much energy on my stroke while still staying strong.”

At the touch, it was Heron who earned his second open water title this weekend at 59.29, just four seconds ahead of B. Gravley (59.33). Earlier, Heron won the 5k title on Friday. When gathering his thoughts on the accomplishment, Heron commented, “This is the first time I’ve been able to win both at the same meet, so that’s pretty exciting. This competition was really exciting because it was truly ‘open water,’ the conditions were a little bit more rough than swimming in a lake. It’s fun not knowing what to expect in a race, and I like that about open water.”

Friday’s 10k champion Erica Sullivan led the first two laps of the 5k over Haley Anderson and Ashley Twichell. Veteran Twichell told USA Swimming about her 5k race that, “I tried to stay really comfortable until those last couple of laps. As I get older, it’s harder to do a 5K just two days after a 10K, so I just tried to stay with the pack. I knew that back stretch was going to be choppy and be hard for anyone to really make a move, so I tried to make a move on the front half of that third lap.”

Yet Twichell avenged her runner-up finish in the 5k by passing Sullivan and Anderson on the last lap, taking the 2021 national title at 1:01.31. Finishing seven seconds later was Anderson at 1:01.38 while Sullivan faded to third at 1:01.41. Earning U.S. National team status were World Junior 5k qualifiers Katie Grimes (1:02.24) and Bella Sims, both 15-year-olds from Sandpipers of Nevada. Grimes won the junior 5k yesteday at 1:04.04, improving by 1:48s while Sims placed second at 1:04.46.

Heading into the Tokyo Olympics, Twichell mentioned, “I feel like my endurance and speed are both really there, which is really exciting. I’m just looking forward to continuing to train and competing at (the U.S. Olympic Team Trials – Swimming) in the pool and then heading to Tokyo. The competition and atmosphere will be different there but the U.S. has a lot of talent so these races weren’t easy by any stretch of the imagination. This definitely gives me confidence.”

During the first two laps of the men’s junior 7.5k, NOVA’s Will Glass and Fishers’ Jackson Carlile lead the pack. Yet TAC Titans’ Jacob Pishko took over Glass’ lead in lap four and held onto it heading into the final lap. Pishko would then take the title at 1:35.24 while Highlander’s Joshua Brown took second at 1:35.44, punching their tickets to Seychelles. Sandpipers’ Brice Barrieault took third at 1:35.51 while Carlile placed fourth (1:35.59) and Glass faded to 10th overall (1:43.09).

“It was kind of weird— this was my first time ever swimming a 7.5K. I had a couple of friends who were in the 10K so I kind of picked their brains on the course and how it felt. What I got from that was going north, up the coast, it is better to swing out a little bit and then go back into the buoy, so that’s what I tried doing most of my race. When I did that in the first lap, I don’t think anyone really noticed me and then things just kind of took off from there,” Pishko said during his post-race interview.

Gabby Goodwin of Blue Dolfins took the early lead over Treasure Coast’s Blair Stoneburg and Lakeside’s Mariah Denigan. Then, Sandpipers’ Paige Kuwata took over the lead at the 2.25k-mark (or 2.5 laps), with Denigan and Stoneburg following her newly-established lead. Then, Denigan took over the lead heading into the final lap, securing her spot on the 2021 World Juniors team with a 33-second winning margin at 1:40.05. Puching her ticket to Seychelles was Kuwata at 1:40.38.

When Denigan was asked on her experience with the 7.5K, she told USA Swimming, “It felt really good. The waves got harder on the back half, but I knew I was in a good spot and just had to finish strong. This is my first time doing a 7.5K, I’ve done a 10K and a 5K all in one weekend before, so I figured the 7.5K shouldn’t be too bad as doing both of those so I was really excited to swim it going into this weekend.”

Here’s a look at the age brackets and qualifying events for the World Junior meet: