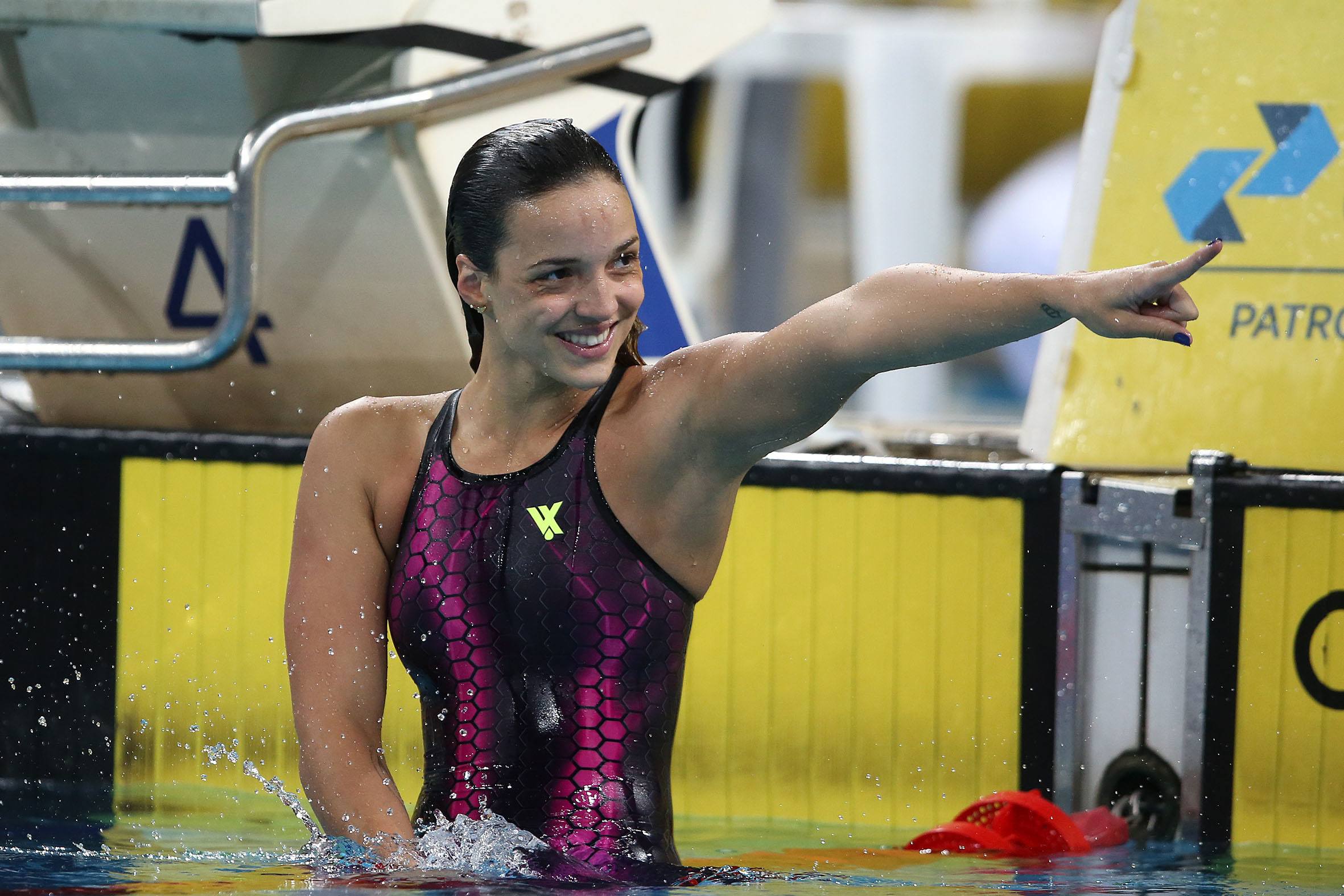 Jhennifer Conceicao could not wait for the finals session to drop a lifetime best time, dropping one-third of a second off her previous best from June 2019 to earn the top spot going into tonight’s 100 breast final (1:07.35). She is going to need to repeat that feat in order to meet the FINA A cut of 1:07.07.  Bruna Leme snagged 2nd, being the only other swimmer to break 1:10.00 with a personal best time of 1:09.99.

Conceicao qualified for the 2016 Rio Olympics as part of Brazil’s 4×100 medley relay which finished in 13th place. She also earned 5th place in the individual 100 breast at the 2019 Pan American Games.

Brazilian National Record-holder Guilherme Guido and Gabriel Fantoni were neck-and-neck in the men’s 100 back, with Guido taking the top finals spot with a time of 54.74, .07 ahead of Fantoni. This was a really solid swim for Fantoni who came into this meet with a seed time of 54.13, but we can expect Guido to pick up the pace in finals since he was nearly 2 seconds off his seed time. 34-year-old Guido finished in 14th place in this event at the 2016 Olympics and Fantoni has four-peated in this event at the Big Ten Championships for Indiana.

There is a 2 second gap between Fantoni and the rest of the field, but someone else to watch out for will be Guilherme Dias Masse whose seed time is just .11 slower than Fantoni’s. Massé finished 4th in prelims.  (56.52). They will need to break 54.00 to secure the FINA A cut (53.85), which Fantoni and Guido have both done before.

The women’s 400 free looks to be anyone’s race tonight, with the top 6 swimmers finishing within 2 seconds of each other. Gabrielle Gonçalves led the field this morning as the only swimmer to crack 4:16.00 with a time of 4:15.96. She already demonstrated her endurance in the 400IM last night, winning the event by more than 2 seconds, but missing the FINA A cut.

The dark horse of this finals race might be Aline da Silva Rodrigues who finished in 5th this morning, despite having the fastest seed time by 4 seconds (4:10.88). She posted that time in December 2019 at the U.S. National Championships. But, everyone will have to swim considerably faster in the finals to reach the FINA A cut of 4:07.90.

Etiene Medeiros dominated the four-woman heat of the 100 backstroke, touching the wall 1st with a time of 1:02.45 with a 1.5 second lead over the field. This wasn’t a particularly fast time for Medeiros who was entered with a 1:00.13, .12 under the FINA ‘A’ cut. Her lifetime best stands at 59.61 which she posted at the 2015 Pan American Games. In 2nd was Natalia de Lucca (1:03.93) who will have to drop more than one second from her lifetime best to crack the FINA ‘A’ cut time tonight.

Michigan Provides 23.6 Fly Cut up Brady Kendall to Class of 2026