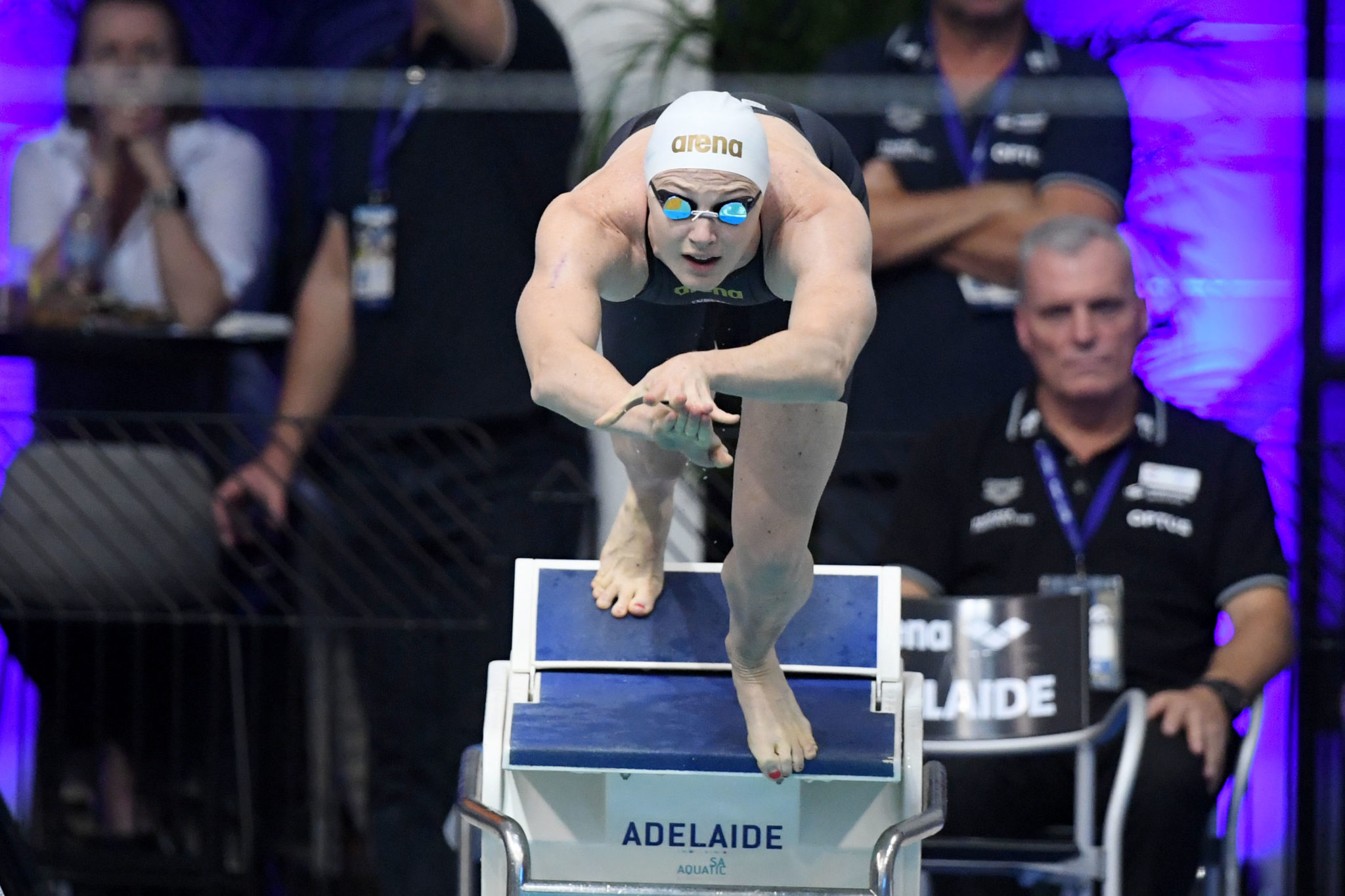 Racing continued on the second night of the 2021 Australian Swimming Championships as day 2 prelims featured the 100 freestyle, 100 backstroke, 200 butterfly, and 50 breaststroke. As a reminder – this meet is being run with morning finals and night time prelims so the corresponding finals for this day 2 prelims session will occur in the morning of day 3 (10 am local time on April 16 / 8 pm EST on April 15).

One of the quickest fields we saw in the water during day 2 prelims was the women’s 100 freestyle in which Cate Campbell posted a 52.43 for top seed while Emma McKeon also dipped under 53 with a 52.71. Having two women in the 52 range at this point in the season certainly bodes well for Australia both in terms of individual performance at the Olympic Games this summer as well as for the relay. Their relay efforts could likely be back by the quartet of women who all swam a 53 this morning as Madi Wilson touch 3rd with a 53.40, Bronte Campbell a 53.62 for 4th, Mollie O’Callaghan a 53.78 for 5th, and Meg Harris a 53.87 for 6th.

Considering that we aren’t yet at Australian Trials which are set for June, we can’t say for sure that who will end up racing the event individually or in relay format for the country. The fact, however, that it will likely take a 54 to make the Trials final and 52 mid to make the team is certainly evidence that Australia will be a force to be reckoned with in the event this summer.

On the men’s side of the 100 freestyle, 2016 Olympic Champion Kyle Chalmers managed to post the top prelims time by nearly a second with a 48.11. The closest competitor to Chalmers was Louis Townsend who got under the 49-second mark with a 48.93 to improve upon his entry time of 48.93. Jack Cartwright and William Yang swam the 3rd and 4th fastest times of the prelims with a 49.36 and 49.43, respectively.

Notably, 3rd and 4th seeds Clyde Lewis and Cam McEvoy missed out on qualifying for the A final as McEvoy hit a 50.29 for the 11th fastest time in the field and Lewis was a 50.78 for 21st. Both were slower than their entry times, McEvoy a second and a half over his 48.66 seed and Lews more than two seconds slower than the 48.45 he went in with.

Following Kaylee McKeown‘s 50 backstroke triumph during day 2 finals, she and Emily Seebohm set themselves up for another backstroke battle in the 100 backstroke finals as McKeown posted a 59.29 prelim swim while Seebohm was a 59.85. While both were a bit off McKeown’s current national record in the event of 57.93, McKeown managed to get under Swimming Australia’s selection cut for the Olympics of 59.71.

Mollie O’Callaghan finished third in the prelims with a 1:00.60 and will be looking to get closer to her 59.59 PB which she swam in December 2020. Not to be counted out of contention, short course world record holder in the event Minna Atherton got into the wall in her prelim with a 1:00.85 which is more than 2 seconds slower than the 58.60 that she swam at the 2019 World Championships.

The biggest shock during day 2 prelims was Mitch Larkin‘s disqualification in the men’s 100 backstroke. Larkin swam to a 53.38 to establish the top time in both his heat and in the entire field but shortly after he cleared the pool, it was announced that he was DQed due to a false start in the event. In Larkin’s absence, Tristan Hollard will go into the 100 backstroke final as top seed with his 55.10 from the prelims while Thomas Hauck followed with a 55.25 for second seed while Bradley Woodward was third in a 55.33.

Setting up a heated battle for finals, Elizabeth Dekkers, Meg Bailey, and Brianna Throssell were separated by only 0.18 seconds in the prelims of the women’s 200 butterfly. Second seed heading into the event Dekkers was a 2:09.60 in the heats of the event and was closely followed by Bailey who with a 2:09.70 who moved up from 3rd seed to 2nd for the final. Brianna Throssell was entered as the top seed in the event and was just outside of the top 2 in the prelims with a 2:09.78.

All three will be looking to be faster during finals and will have a shot to achieve the Australian qualifying standard of 2:08.43 in the event which would bode well for them looking forward to Olympic Trials in June.

As for the men, Bowen Gough out-swam top-seeded Matthew Temple in the men’s 200 butterfly prelims with a 1:58.75 to Temple’s 1:59.31. That race for Gough was a few seconds short of his 1:56.65 PB in the event which he swam in July of 2019 while Temple also trailed his similar PB of 1:56.52 which he swam in the prelims of the 2019 World Championships. In terms of Olympic qualification, it’s going to take a PB from Gough and Temple this June in order to qualify to swim the event in Tokyo considering Australia’s selection cut of 1:56.25 for the event.

In the sole non-Olympic event of the prelims, Chelsea Hodges swam a 30.32 50 breast to get 0.16 seconds off the current Australian record of 30.16 held by Sarah Katsoulis. Jake Packard was the top seed in the event for the men with a 27.74, slightly ahead of Matthew Wilson‘s 27.78.

Shout From The Stands: Seeing is Believing within the Sport of Swimming